We have permits for club play at Murdo Frazer:

The other 90% of the court time at Murdo Frazer is open to the public from 8-am to 8-pm. (Courts are locked at night.)

NSPC membership now exceeds 400 people.  While a hundred of those are new to the club and/or the game, many more of us are long time members and players.  We have always been a friendly group to play with.  And we do so at multiple locations.

In the “old days”, the club operated by putting up nets for club play.  Now with permanent nets at three locations we are sharing with the public, except when we are given permits.   Here are your options for club play this summer.

Thanks to long time advocacy work, West Vancouver has had 3 permanent courts at this location since early 2019.  NSPC has no permit to play, but the pickleball community is welcoming and congenial.

We understand from some of the regular players that their system is whoever shows up gets to play obviously and, when more people arrive, either familiar players or newcomers, the current players usually finish their game or two at the most and then sit out (assuming all courts are busy) and make a court available to the new arrivals or invite them to play.

They are a socially friendly group respecting the growing sport and go out of their way to make all newcomers and beginners welcome.

This appears to work better than the 30 min posted rule, although it is recognized some people may insist on playing 30 mins as that is the municipal rule.”

Courts are open 9-am to 6-pm Monday through Sunday only.  This is being contested by the club and public and NSPC has been promised another location asap.

A fun-loving group continues to play at Little Cates on the 2 courts with portable nets stored in a box there.  Members wanting to use them are given an orientation by Board member Karen Wilson.  Play is rotational and inclusive.

New courts have been postponed … again!

Lots of new players are discovering the four permanent courts at Mahon.  They are particularly busy weekends and evenings.  Play is limited to a 1/2 hour and a paddle on the fence is the method used to determine next-up. NSPC has no permit to manage club play although some club members play here.

During public play times, you may get your own court, make your own rules, etc.. Check below for a list of full public pickleball courts on the North Shore.

Tuesday, Thursday and Saturday 9-am – noon and Monday’s and Thursday’s 6 – 8pm

You can google it and get the rules from any number of clubs.  Here are the basics.

Check the NVRC and West Vancouver Leisure Guides. This is still changing as Recreation Centers adjust to lessening restrictions. 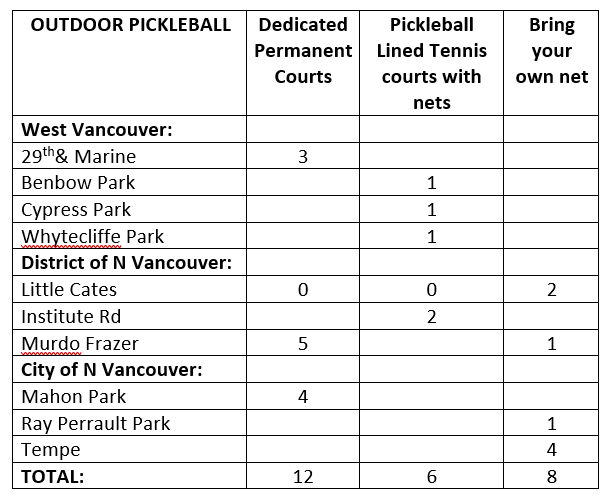